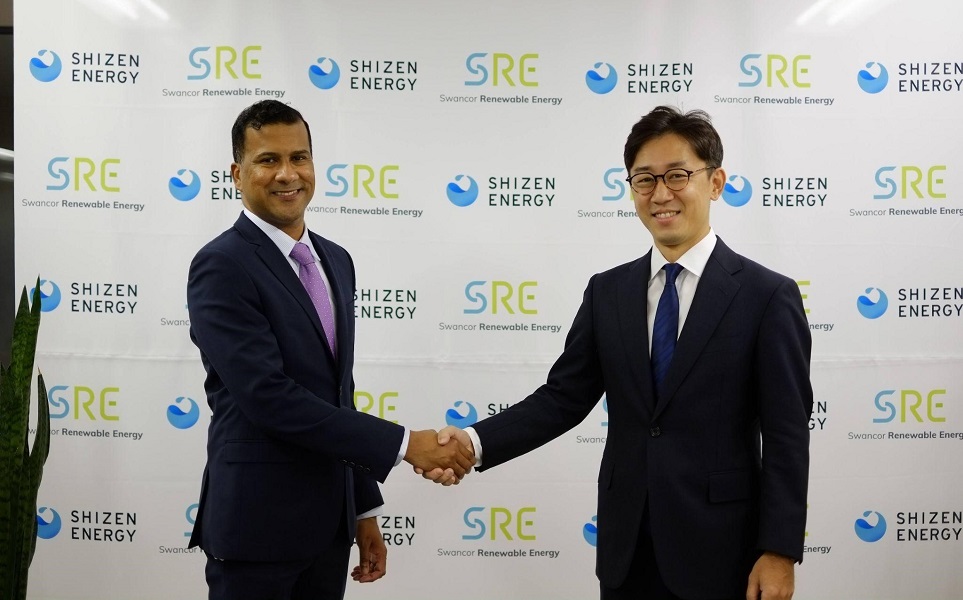 Taipei, December 9, 2021 - Swancor Renewable Energy (SRE) and Fukuoka-based Shizen Energy Inc. (“Shizen Energy”) have now agreed to jointly develop a wide range of offshore wind farms throughout the Kyushu region in a joint venture. By combining SRE’s technological strengths and experience in Taiwan, which has geological similarities to Japan's sea area, and Shizen Energy’s developmental strengths in introducing renewable energy that embraces local conditions, the two companies will work together to further promote offshore wind power in the Kyushu region, which is expected to also help deepen non-governmental bilateral economic relations between Japan and Taiwan and usher in a new chapter for the exchanges between the renewable energy sectors from both sides.

Meanwhile, the other two Taiwanese firms will also be ready for cooperating with SRE, J&V Energy Technology and Yeong Guan Energy, who hope that with their input the development project may be enriched further and with a view to realize the vision of exploring Asian markets.

Japan's offshore wind market is gaining momentum following the Japanese government's goal of promoting the introduction of renewable energy and the passage of the Act of Promoting Utilization of Sea Areas in Development of Power Generation Facilities Using Maritime Renewable Energy Resources. In 2018, the Japanese government set a goal of increasing the share of renewable energy generation to 22-24% by 2030, and in 2021 increased this target to 36-38% by further strengthening measures.  This goal also includes plans to introduce 10 GW of wind power, including both offshore and onshore wind power.

SRE is a leading developer in Taiwan's renewable energy industry, and a pioneer in the offshore wind sector in particular. In 2012, it began developing the first offshore wind project in Taiwan and has been involved in the development of a cumulative total of approximately 5,000 MW of projects, including construction, operation and maintenance. In addition, the Formosa 1 project, which went into operation in 2019, is the sole offshore wind farm currently operating in Taiwan. Unlike the waters of Europe, where offshore wind power has been developing for many years, Japan's waters are geologically challenging, and the effects of typhoons must be taken into account. Taiwan's waters are very similar in this respect, and the experience and knowledge that SRE has built up over the years will be applied to the Japanese offshore wind market.

Lucas Lin, CEO of SRE said, “As a renewable energy developer, we have been paying close attention to how climate change and global warming have affected our lives, and have been endeavoring to promote Taiwan’s energy transition and a sustainable environment as part of our corporate mission. We are very excited about the partnership with Shizen Energy.  To participate in Japan’s offshore wind development will not only open a window of opportunity for us to realize our ideal of exploring overseas markets, collaborate with international partners to promote renewable energy in a joint manner, but is also an important step towards expanding diverse, bilateral exchanges and cooperation between Japan and Taiwan.

Masaya Hasegawa, representative director of Shizen Energy, said, "We believe that the purpose of Shizen Energy's existence, ‘We take action for the blue planet,’ is the very objective of our business. In order to achieve this goal, we want to build a future together with our partners around the world who share our ambition to accelerate the expansion of renewable energy. We are convinced that this partnership with SRE, which has experience in the development of wind farms off the coast of Taiwan, will be a powerful driving force in advancing development off the coast of Kyushu, and will further accelerate the introduction of offshore wind power in Japan.”